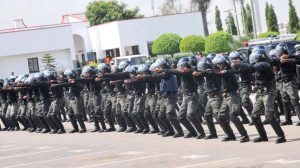 The Police Service Commission (PSC) has issued warning to the Integrated Payroll and Personnel Information System (IPPS) Office against capturing police intakes without an appointment letter from the commission.

The decision contained in a letter signed by its spokesperson, Ikechukwu Ani was taken during its plenary meeting, chaired by its acting chairperson, Justice Clara Ogunbiyi in Abuja.

It facilitates easy storage and retrieval of personnel records for administrative and pensions processing to aid manpower planning and budgeting as well as to comply with global best practice.

In 2019, President Muhammadu Buhari directed the ministry of finance to ensure that all employees of the Federal Government are enrolled on the IPPIS platform.

Hence, the plenary which commenced on Tuesday and is scheduled to end on Thursday warned that the IPPIS Office desist from capturing the payments of any Police new intake without a letter issued by the commission.

The PSC decided that all stakeholders involved in this illegal act should be notified in writing of the dangers of this anomaly and possible legal implications.

Also, the PSC during the meeting reviewed and approved the new date of the appointment for graduates of the police Academy in Wudil, Kano State.

The commission approved that the date of appointments for graduates of the Police Academy would henceforth be the dates they graduated from the Academy.

It also approved that the graduands date of confirmation shall be two years after graduation but on the condition that they sit for and pass the compulsory confirmation and promotion examination.

The statement reads partly, “The Commission according to the Plenary decision shall be responsible for conducting the Compulsory confirmation and promotion examination for the Officers.

“The acting Chairman said the Commission will continue to work to ensure that the Nigeria Police Force is properly positioned to contribute effectively to nation building and security”.

The Inspector-General of Police (IGP) Usman Alkali-Baba had earlier approved the credential screening of applicants who completed their online registration into the ninth Regular course intake of the police academy Wudil Kano.