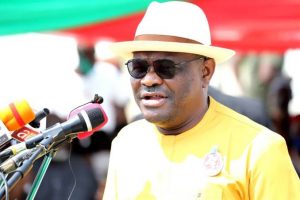 Rivers State Governor, Nyesom Wike, has alleged that the chairman of the Peoples Democratic Party (PDP), Iyorchia Ayu took money from a presidential candidate in Lagos State.
The PDP chieftain who spoke on Friday challenged Ayu to deny the claims, noting that he has evidence. Wike, however, refused to mention the individual who Ayu collected the money from.

Wike who said he was hugely pained that he was unable to win the PDP’s presidential primary and go on to battle the All Progressives Congress, APC, said the money Ayu collected did not enter PDP‘s account.

He said: “Will he deny the fact that he did not collect one billion naira from Lagos? Yes, let him deny it, I will tell him who gave him the money.

“Not Lagos state government, but someone in Lagos. The money was given to him in Lagos. He met one of the presidential aspirants and told him he was not sure state governors would want to sponsor the party.

“Let Ayu say no, I will even call some of the businessmen and how the money was arranged in Lagos. That money did not enter the account of PDP. But we are not attacking Ayu on that basis,” Wike said during an interview on Channels on Friday, Naija News reports.

Wike stressed that he has a good relationship with the party and that is why he is making sure candidates that emerge in my state win in the 2023 general elections.

Returning to the call for Ayu’s resignation, Wike said the issue as it is today is that as it is provided in the constitution of the party that there shall be zoning of party offices and elective offices.