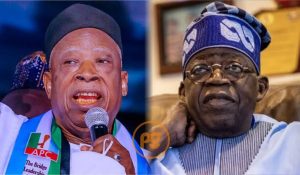 The rift between National Chairman of the All Progressives Congress, APC, Senator Abdullahi Adamu, and the Presidential Candidate of the party, Bola Tinubu, over composition of the party’s presidential campaign council may have deepened.

The rift has affected the composition of the council with a few weeks away from the commencement of the 2023 presidential campaign based on the time table of the Independent National Electoral Commission, INEC.

THE WHISTLER gathered from credible sources that while Tinubu wants to handpick key people that will deliver his message on key issues, Adamu wants his “loyalists to be in charge.”

One of the grey areas of disagreement between the pair is the position of former Edo State Governor, Adams Oshiomole. Adamu is said to be wary of the overarching influence of Oshiomhole.

Also, both Adamu and Oshiomhole, apart from being at cross purposes on various issues, do not share the same political ideology.

Oshiomhole is largely seen as Tinubu’s Man Friday even as both share the same political ideology.

A source confided in this medium that the emergence of Plateau State governor, Solomon Lalong and Oshiomhole as Director General of campaign and Deputy Director General was Tinubu’s decision, without Adamu’s support.

“Adamu’s current target (now) is to ensure his men control the campaign council.

“The delay is basically because of appointments into key positions. The Tinubu camp is flooding the campaign with people but Adamu and top APC stakeholders also want membership, that’s what is delaying the composition of the council,” the source said.

All efforts to scheme out Tinubu failed as he went on to win the primary election in June. While both appeared to have mended fences in public, there are concerns within the party and Tinubu camp that all is not well.

There are also accusations that some interested persons are “bribing their way into the campaign council,” an allegation the Presidential Spokesman of the Tinubu Campaign,Bayo Onanuga, denied.

Onanuga, in his reaction, told THE WHISTLER on Monday that both men enjoy cordial relationships, denying any rift between them.

He also said the allegation of bribery was not true.

He said via a text message that all allegations are “fake news, all.”

Attempts to get the reaction of the spokesman of the APC were unsuccessful as his phone rang out and text messages sent to his telephone were not replied.