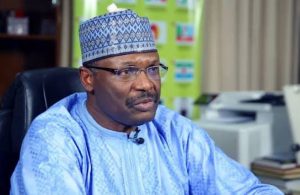 The Independent National Electoral Commission (INEC) is mulling adopting ‘body odour’ as one of its biometric identifiers for voters during elections.

INEC’s Chairman, Professor Mahmood Yakubu, revealed during his presentation at the Chatham House, London, on Tuesday, that the commission’s technologists made the recommendation during the last upgrade of INEC’s identity verification system from the Automated Fingerprint Identification Software (AFIS) to the more robust Automated Biometric Identification System (ABIS).

Yakubu said he cautioned the in-house engineers to “make haste slowly” and allow the commission to get accustomed to the ABIS, which makes use of the fingers and facials for verification, before adding a new layer of verification.

The INEC chairman suggested that in the nearest future, the electoral umpire may adopt body odour for verification of voters during elections.

“And all these innovations were all the work of INEC’s own in-house engineers in the commission, the machines may have been fabricated outside the country but the design of the machines were done by our own engineers in-house.

“In fact, one of them said they’re going to introduce a new biometric using body odour. I said please not yet. Let’s make haste slowly but when he explained it to me, it sounded logical. He said, don’t laugh, chairman, because I said body odour. It is also biometric. He said, how does your dog recognize you? It is from your body odour and that’s why if another person walks into the house it barks, when you move into the house, it wags its tail because it recognizes your body odour, I said but for elections let’s wait,” Yakubu said at the Chatham House.

THE WHISTLER reports that while researchers are making progress on the development of odour detection for the authentication of humans, there are concerns that it may not be as reliable as finger and facial identification methods.

According to the Biometrics Institute, “primary body odour of individuals has been studied to determine the extent that it is distinctive and stable over time and potentially can be separated from other odours conveyed by the human body from sources such as soaps, perfumes, diet and the environment” even though “Some diseases may disrupt or mask the primary odour.”