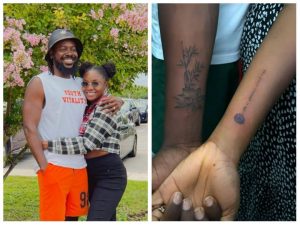 Nigerian celebrity couple, Adekunle Gold and his wife, Simi, have shown off the tattoos that they got on their arms to commemorate their wedding anniversary.

This comes a day after a video went viral showing, Davido and his wife, Chioma, getting each other’s names tattooed on their ring fingers.

The tattoo on Adekunle’s arm shows a fully bloomed flower while Simi’s tattoo reads, “This flower bloomed in April.”

The couple got married in January 2019.