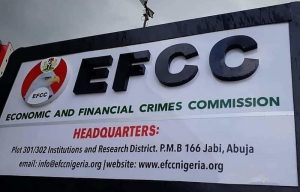 One Muhammad Sadiq Abubakar, a bank account holder with the United Bank for Africa (UBA), has petitioned the Gombe Zonal Command of the Economic and Financial Crimes Commission (EFCC), over alleged fraudulent withdrawals from his account.

Abubakar, a resident of Bagadaza Quarters in Gombe, Gombe State, wrote the petition on 5th October, 2022, through one Barrister Iliya Manu, a solicitor with M.A. Attah & CO, appealing for the intervention of the EFCC.

In the petition, he alleged that on 30th July, 2022, the sum of three hundred and fifteen thousand nine hundred and seven naira five kobo (N315,907.05) was fraudulently transferred from his UBA Account into another account.

The petition partly reads: “We are solicitors to MUHAMMAD SADIQ ABUBAKAR of Bagadaza Quarters Gombe, Gombe State with phone number 070….. who shall hereinafier be referred to as our “client” and on whose express instructions and behalf we write on the above subject matter.

“We were informed by our client and verily belief him to be true that sometimes on the 29’h day of July, 2022 at about 1:09Pm, the sum of one hundred and ninety-eight thousand five hundred- and fifty-three-naira seventy-five kobo (N198,553.75) was fraudulently transferred from his UBA Account stated above.

“That again, on the 30th day of July, 2022, the sum of one hundred and seventeen thousand three hundred- and fifty-three naira, seventy-five kobo (N117,353.75) was transferred from his account.”

According to the solicitor, his client had informed him that he received an SMS of a debit alert for the two withdrawals made from his account.

He added that on seeing the alert and the amount that was transferred, Abubakar went to his bank to complain.

After laying his complaint at the bank, the bank had instructed him to go and come back after a week.

“Our client then after the expiration of the one week came and requested for his bank statement which same was given to him.

“In the light of the foregoing, we appeal to your good office to cause investigation into this petition with the view of unravelling and bringing the culprit behind this fraudulent act to justice,” said the lawyer.

The petitioner urged the EFCC to maintain the tempo in the fight against corrupt practices in the form of fraud and other financial crimes in Nigeria.

The EFCC had disclosed during one of its town hall meetings on twitter, that it had received several complaints from several bank customers that some unscrupulous elements have infiltrated the banking sector and are duping people.

Damilola Ajayi of the EFCC added that the fraudlent acts were perpetrated with connivance of bank staff.