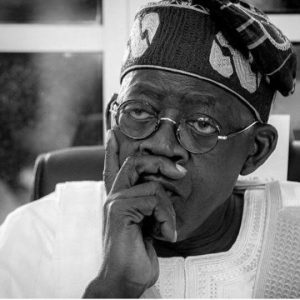 The presidential candidate of the All Progressive Congress, Asiwaju Bola Ahmed has landed in fresh crisis after he used Fela’s song in some of his campaign materials for his 2023 presidential ambition.

The song titled ‘Eko Ile’ was adopted by the Tinubu’s campaign organization and this has brought an ugly reaction from the musician’s family.

Femi Kuti, one of the musician’s son took to his social media pages to knock the APC for not seeking consent before using the material for campaign. He revealed that Fela’s songs are neutral and should not be used for campaign by any politician.

‘’ DISCLAIMER AND NOTICE OF USE WITHOUT CONSENT’’

‘’We the Administrators of The ESTATE OF Fela Anikulapo-Kuti ISSUE THIS DISCLAIMER. WE wish to state here for clarity, that the permission of the Estate was not sought for the use of Fela’s music ‘Eko ile’.’’

Meanwhile, this isn’t the first time Tinubu’s presidential campaign organization will be caught in the web of such occurrence.

Just recently, the former governor of Cross River state, Donald Duke called out the campaign organization for lifting his picture as a boy for Tinubu’s image as a young man.

Donald Duke made it known that the campaign organization was not able to find Tinubu’s picture as a young man and this made them resort to using his pictures which he is totally against.