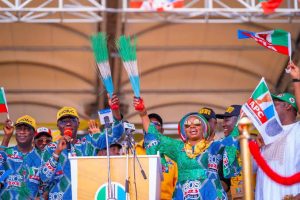 Lagos State governor and gubernatorial candidate of the All Progressives Congress (APC), Babajide Sanwo-Olu, on Saturday, kicked off campaign to secure a second term in office, with show of support from party leaders and members.

Listing his achievements so far, he said that his administration has shown commitment to rapid infrastructural development in the state, with completed strategic projects such as bridges, roads, ports and many more, thereby renewing the hope of residents.

Sanwo-Olu also said that his administration upgraded two tertiary institutions in the state to degree-awarding schools, as well as rewarded and encouraged excellence, thereby improving human capital development. According to the governor, the state has also trained 18,000

Other achievements he mentioned include completion and inauguration of 16 housing schemes; commissioning of over 62 fire-fighting vehicles with understanding of the state environment; and equipping the firefighters with education and world class gear.

The governor further listed Imota Rice Mill and the record completion of the Lekki Deep Sea Port as his administration’s achievements, adding that they are all proofs that a greater Lagos is indeed rising.

“It has been an interesting three and a half years for us — for Femi (Hamzat – deputy governor), myself and our cabinet, and of course, the state assembly. It has been an interesting and Challenging one at a time where we see global disruption worldwide; where we’ve global economic melt down; where we’ve seen global health issues, but your state , your government continue to remain resolute, remain committed,” Sanwo-Olu said at Mobolaji Johnson Arena, Onikan, Lagos, venue of the event.

He noted that with the exemplary style in which the state managed Covid-19 pandemic and other health emergencies, and launching of a health insurance scheme that is non-discriminatory and truly citizen-focused, his government is well positioned to deliver on the new mantra.