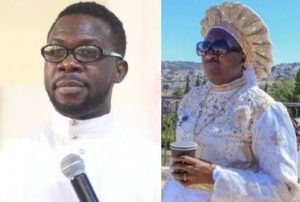 Reports has it that all has gone sour between popular celestial prophet, Israel Oladele AKA Genesis and his spiritual mother, Rev Mother Esther Ajayi. This was evident in the recent outburst of the prophet during a live service at his church.

Prophet Genesis who didn’t directly mention Esther Ajayi’s name started by saying a woman he respects a lot abandoned him when he was in trouble despite the fact that he served her diligently.

He continued by saying the ‘woman’ gave deceased Yoruba actor, Baba Suwe the sum of N10 Million and supported young orange seller who did a cover of Tope Alabi’s song but never bothered to render help to him when he needed it.

It would be recalled that Rev Esther Ajayi went viral for giving Baba Suwe N10 million and for helping the young orange seller last year.

Genesis made it known that Esther Ajayi has shown that she isn’t a woman of God with the singular act of abandoning him. He also explained that she has removed his pictures from her church since the tribulations began.

While revealing some secrets, Prophet Israel Oladele Genesis mentioned that the same thing that happened to him happened to Esther Ajayi but he was the one who covered up for her and prevented her from suffering what he suffered.

Furthermore, he warned her not to reply him because he will expose more secrets about her.

‘’I will not say it secretly, she just showed that she is not a woman of God, she helped people but I that serve her, She couldn’t help me when I got into trouble.’’

‘’What happened to me happened to you but I covered up for you, I am not scared of death or anything, I don’t need any friend.’’

‘’You are a woman, you know my mother, I was not even surprised when you said you had a dream about me in the midst of herbalists, it simply means you are one of them too.’’

‘’You better don’t reply me, if you do, it will be very disastrous than Oba Solomon.’’