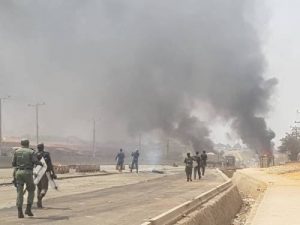 Many people have been injured in Ikare-Akoko town, Ondo State, following a crisis that erupted during the youth carnival celebrations in the town.

It was gathered that some youths were celebrating carnival in the town on Tuesday afternoon when misunderstanding ensued between two groups in the community.

A resident said the crisis started at the venue after an argument ensued between two youth groups and the situation escalated into a free-for-all.

He however added that the clash may not be unconnected with the power tussle between the Olukare of Ikare, Oba Akadiri Saliu Momoh and Chief Idowu Ogunye, Olokoja of Okoja, Ikare-Akoko, Ondo State.

“The Olokoja asked the youths not to organise carnival at his area. Another chief in Ogoja had organised the carnival but Ogunye insisted it would not hold because that Chief is loyal to Owa-Ale,” the resident told SaharaReporters.

In 2021, Ogunye was dethroned for absenteeism, disloyalty and refusal to obey directive of the Olukare of Ikare.

The Ikare monarch relieved the appointment of Ogunye with effect from January 20, 2021 and cautioned him to stop parading himself as Olokoja of Okoja.

But Ogunye courted the trouble of the Olukare by being loyal to a rival monarch in Ikare-Akoko, the Owa Ale of Ikare
He had through his lawyer, Femi Emodamori, insisted that he remained the Olokoja of Okoja and described his suspension and purported expulsion as illegal and strange to the tradition of Ikare Akoko.

Ogunye had stated that he was one of the kingmakers that participated in the selection of the new Owa-Ale of Ikare Akoko even though he had been suspended since 2018 by Oba Momoh.