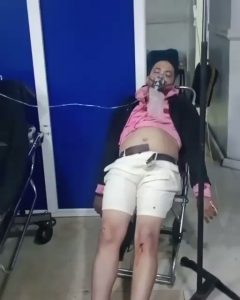 A 30-second video clip showing the final moments of a former reality TV star, Patrick Fakoya, aka Rico Swavey, at a hospital in Lagos State, has attracted condemnation from members of the public.

In the clip recorded by one of the nurses attending to Rico Swavey, the deceased was placed on oxygen as he was unconscious on a chair.

It was observed that the nurses were attempting to carry him on a bed when the nurse brought out a phone and started recording him.

Another nurse was heard cautioning her colleague against the act.

“You people should stop making the video; somebody is dying, you people are making video,” the nurse said.

Rico Swavey, however, succumbed to his injuries on Thursday.

Reacting to the video, the state Commissioner for Information and Strategy, Gbenga Omotoso, said the state government had commenced investigation.

He said, “That hospital is not a government hospital; we have started an investigation into the unprofessional conducts of those who appeared in that video.”

Health attendants were just making videos and laughing while someone was dying 😭 Sorry rico #ricoswavey pic.twitter.com/NyFR1LPqke