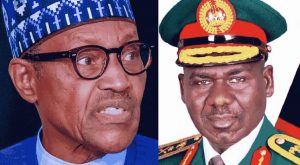 Buratai will be decorated with the Commander of the Order of the Federal Republic (CFR) at an investiture ceremony scheduled for October 11, 2022, at the International Conference Centre (ICC), Abuja.

The award is coming about 19 months after President Buhari appointed Buratai, alongside other retiring service chiefs, as non-career ambassadors.

While Buratai was appointed as Nigeria’s Ambassador to the Benin Republic, a former Defence Chief, Gen. Abayomi Gabriel Olonisakin (retd.), was named the Head of Mission to Cameroon.

THE WHISTLER sited a letter conveying President Buhari’s award of the CFR title to Buratai on Thursday.

The letter marked FMSDIGA/NHA/001/T/90 and dated September 16, 2022, was signed by George Akume, the Minister of Special Duties and Inter-Governmental Affairs.

Akume noted in the letter that accommodation with complimentary breakfast had been reserved for the former Army Chief at Fraizer Suites, from where he would proceed to the venue of the ceremony, while requesting him to “forward a one-page citation and current passport photograph” to an email provided.

Meanwhile, a separate letter dated September 19 and marked FMSDIGA/NHA/001/T/91 also indicated that President Buhari had approved the conferment of the Officer of the Order of the Federal Republic (OFR) title on Dr Bashir Yusuf Jamoh, the Director-General of the Nigeria Maritime Administration and Safety Agency (NIMASA).