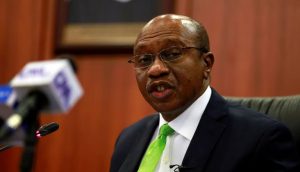 The Central Bank of Nigeria (CBN) Governor, Godwin Emefiele on Monday stormed the headquarters of the apex bank with a team of soldiers from the Defence Headquarters.

Emefiele, according to a source was said to have resumed office on Monday with protection from the team of military personnel.

The source who spoke on the condition of anonymity told THE WHISTLER that the CBN Governor had arrived at his office earlier today with military personnel.

“He came to the office with Army protection. It is believed that the Army protection was as a result of his closeness to the Chief of Defence Staff, Lucky Irabor who is believe to be from Delta state where Emefiele hails from,” the source said.

Meanwhile, the Department of State Services (DSS) has debunked reports of its invasion of the CBN headquarters.

The Secret Service reaction followed viral claims by media organisation (NOT WHISTLER) that its operatives stormed the apex bank and took over the office of Emefiele.

In a statement made available to this website by the DSS Spokesperson, Peter Afunanya, the Service said, “The attention of the Department of State Services (DSS) has been drawn to the false news making the round that its operatives invaded the Central Bank of Nigeria and arrested its Governor, today 16/1/23. This is fake news and quite misleading.”

The CBN boss was said to have returned to the country ahead of the bank’s monetary policy committee meeting slated for next week.

The CBN Director of Corporate Communications, Osita Nwanisobi made this known in a statement.

It said, “The apex bank governor resumed with renewed vigour to perform his duty ahead of the first Monetary Policy Committee (MPC) meeting of the year scheduled for January 23 to 24, 2023.

“Mr. Emefiele remains committed to performing the task before him in line with his oath of office and the policy direction of President Muhammadu Buhari.”