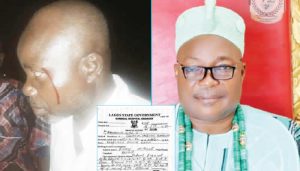 Pandemonium broke out in Ajido community in the Badagry area of Lagos State after the traditional ruler of the community, Saheed Adamson, allegedly beat up one of his high chiefs, Michael Kunnuji, during an argument.

According to Punch, Oba Adamson dealt a blow on Kunnuji, who doubled as his second-in-command, when they had an altercation at the palace.

It was learnt that some youths threatened to destroy the king’s property over the incident.

However, the intervention of policemen from the Badagry division stopped them from carrying out their threat.

The policemen allegedly refused to make an arrest even after Kunnuji filed a complaint at the station.

A police officer was said to have directed the high chief to the Badagry General Hospital, where he was treated.

A medical report from the hospital stated that one Inspector Amina Bara referred Kunnuji to the hospital.

The report affirmed that though Kunnuji was conscious when he was brought to the hospital, he was in pain and bled from an injury in the upper part of his eyes.

The high chief, who spoke to the press, said he was assaulted by the monarch when he paid him a visit after returning from Jerusalem.

Kunnuji explained that a crisis started between him and the monarch when he purchased a transformer for the community, a project the king did not support.

He said, “On September 30, 2022, I went to meet the monarch alongside the bishop that came to do thanksgiving for my coronation anniversary. When I got there, I greeted him in our Egun dialect, saying, ‘I hail you, your highness.’ Then he started shouting in public, saying, ‘Do you see him, look at the way he is greeting me.’

“He told me I was stupid and I also replied that he was stupid. Before I knew it, he punched me in my face with a ring and blood started coming out. I did not retaliate; I just left his palace with my bloodied face.

“I and my lawyer, who was present at the scene, went to the Badagry Police Station to report the assault on my person. After writing a statement, the police said they could not arrest him because he was a king.

“I am filing a case of assault against him; I have employed the services of legal professionals and I will see that I pursue this case and get justice.”

He said, “We know that nobody is above the law. If an Oba has committed an infraction that is criminal, he must be dealt with accordingly.”

When contacted, the monarch did not confirm or deny the allegations against him.

Adamson, however, said that the high chief could go to court.

He said, “Let him go to court, what is your own problem? Are you not a journalist? Why are you asking me such a question? Why can’t you advise him to go to court? Is this the work of a journalist?”

He hissed and cut off the call.

Meanwhile, the DPO of Badagry Police Station, SP Peter Gbesu, denied the allegation that the officers could not arrest or invite the monarch.

The state Police Public Relations Officer, SP Benjamin Hundeyin, promised to confirm and get back.