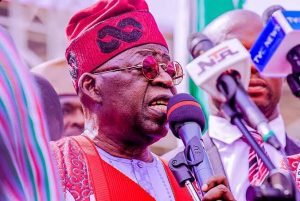 Presidential candidate of the All Progressives Congress (APC) Bola Tinubu has announced the appointment of Mahmud Jega as Special Adviser, Public Affairs, and Abdulaziz Abdulaziz as Special Assistant on Media and Publicity.

Until his appointment, Jega was an in-house analyst for Arise TV and ran a weekly column for Thisday newspaper.

The TV station and newspaper have been a thorn in the flesh of the Tinubu presidential campaign council, over media related matters.

The media outlet has repeatedly called for Tinubu to grant them interviews and attend debates, which the APC candidate have refused.

The former Editor-in-Chief of an online publication, 21st Century Chronicle, however did not take direct role in th confrontation.

He would be joined in the Tinubu team by another seasoned journalist, Abdulaziz, who was until the appointment, Deputy General Editor of Daily Trust Newspapers.

He also anchored a morning show for Trust TV, an arm of the Media Trust Group.

A statement at the weekend by the Tinubu Media Office signed by Tunde Rahman said the two appointees would deploy their expertise and deep understanding of political issues across the country particularly the North in shoring up the activities of the media team.

Following his stint as a lecturer in Biological Sciences at his alma mater, the Usman Danfodio University, Sokoto, Jega has
practiced journalism non-stop for more than three decades, the statement stated.

He at a time served as Editor, New Nigerian Newspapers, Editor of The Sentinel magazine, Kaduna, and Assistant Editor, Citizen magazine.

It pointed out that he also worked as Correspondent, Bureau Chief and Regional Editor for the LEADERSHIP Newspapers, before he joined Blueprint Newspaper which he left in 2017 as Deputy Editor.

Before joining Daily Trust at the beginning of 2021, Abdulaziz also worked with the frontline online newspaper, PREMIUM TIMES, as Associate Editor, according to the statement on Sunday afternoon.